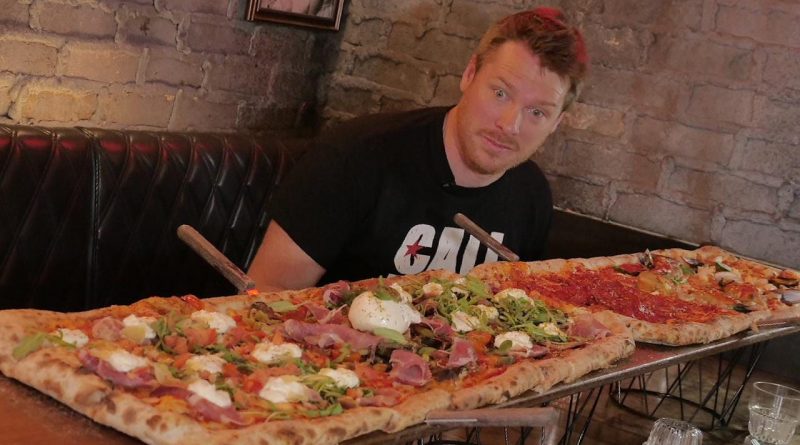 It started with the promise of super cheap chicken wings, and turned into a nationwide search for the most impressive culinary feats regional Australia has to offer.

Food lover Alo Baker has eaten his way around regional areas across the country and is now sharing his discoveries in the new series The Food Dude, which is now airing on 7mate.

The Dubbo-based Triple M radio announcer said the idea for the series came a few years ago when he got a tip about a small eatery on the Gold Coast selling chicken wings for 15 cents a pop.

“I was so impressed by what they’d put in front of me that I filmed a few clips on my iPhone and posted it on social media,” Baker told news.com.au.

“Within minutes it had thousands of views and I realised, hey – people love food!” he said, joking: “I hadn’t realised that’s what 90 per cent of Instagram was at the time.”

After catapulting the 15c wings into instant popularity – the eatery struggled to keep up with demand – Baker turned his attention to another local restaurant specialising in American-style burgers and shared that on social media as well, quickly realising how much Australians craved ideas and advice on the best places to eat.

“Before I knew it I was punching out videos on social media getting hundreds of thousands of views across South East Queensland,” he said.

Around this time Baker was working on another series called Aussie Dreamlivers, in which he and a couple of mates embarked on a wild adventure through the North American wilderness.

When he got back to Australia, he got to work on the idea of an Australian food series that would showcase regional success stories and all the incredible culinary wonders in lesser known parts of the country.

Filming was challenging due to COVID-19 and travel restrictions meant many of the first places he visited were in NSW and Queensland, though he’s managed to venture further out since.

And he’s made some incredible food discoveries along the way.

“I discovered Shannon Nolls’ favourite pie from his local childhood pastry tastery the Condo Bakery in Condobolin in western NSW – which is also haunted,” Baker said.

“I also discovered, after indulging too much on chocolate fudge and ice-cream, you shouldn’t go on a dolphin cruise in Jervis Bay – especially if you are prone to sea sickness.

“(I found) a two-metre pizza at Criniti’s in Newcastle, a huge Tomahawk steak in Junee, NSW, and judged pies at Quinneys Pies on the Gold Coast, among a stack of other things.”

Some of the most memorable moments for Baker came during a visit near his own home town of Tumbarumba in the NSW Snowy Valleys, which is home to the excellent Tumbarumba Bakery, and where he saw how regional areas have struggled over 2020.

“That was smashed by the bushfires and then again by COVID,” he said.

“I actually came home to help with the fires at the time and those local businesses got hit hard so being able to show off what they’re capable of was a real privilege for me.

“But the general vibe from businesses affected by the fires and then COVID – from the Snowy Valleys to the NSW south coast – is that despite everything, they want people to know they’re still there and pushing out the best of the best in food offerings.

“They are powering forward, kicking goals and making world class food that deserves its place in the spotlight. From a pie shop in Rutherglen, Victoria to a Mexican food van in Townsville, these places are the local heroes in our regional towns and that is why The Food Dude exists.”

During his regional travels Baker tested his nerve with some epic food challenges, often with hilarious results.

With Australians taking regional holidays as much as ever right now, and with quality food to experience almost everywhere, Baker’s advice for travellers was to simply “pull a map out and randomly pick a spot”.

“It’s 2021, just about every town has foodie culture and is just waiting to be tasted,” he said. “Never has food quality been so good. And don’t just go to the first typical trendy Instagram place – go to the little guys with the faded shop front off the main street.

“It exists because often it’s the locals favourite spot. Even the bakeries are changing with the times and are offering gourmet items you’d never realise were made in the old faithful pastry shop. Small business is fighting back and pushing out stuff you won’t see anywhere else.”

Will states be open by Christmas?