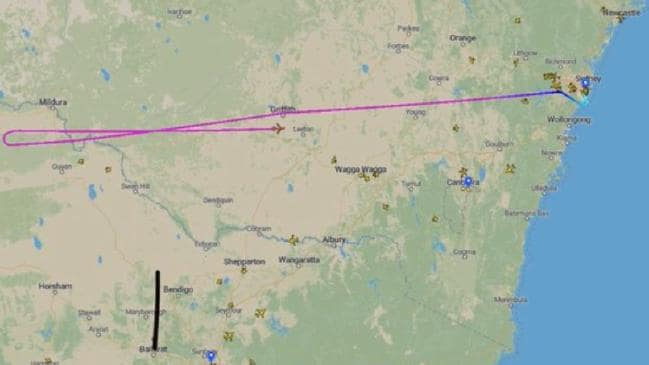 A Qantas flight from Sydney to Adelaide has been “turned around mid-air” this afternoon after news broke of a coronavirus cluster at Adelaide Airport.

The airline confirmed the plane was forced to turn around due to no-one being able to service the aircraft once it arrived in Adelaide after the oubreak among six baggage handlers forced 100 staff into quarantine.

A flight tracking image shows the aircraft turning back just as it reached the border between NSW and South Australia.

It was one of seven affected flights in and out of Adelaide on Tuesday.

Qantas issued a statement saying it was working with South Australian Health and said services would return to normal tomorrow.

A coronavirus outbreak at Adelaide Airport has forced more than 100 people into quarantine after six baggage handlers tested positive for the deadly virus.

While Dr Spurrier said the original coronavirus case among the baggage handlers had not been found yet, she said Qantas had undertaken all the required sanitisation of affected areas and the more than 100 workers who used the areas were in quarantine.

Dr Spurrier advised anyone who had used Qantas to fly in or out of Adelaide Airport in the past 24 hours that “it may be worth giving your bags a wipe over and also monitoring yourself for symptoms”.

Europe on edge as COVID lockdowns combine with terror