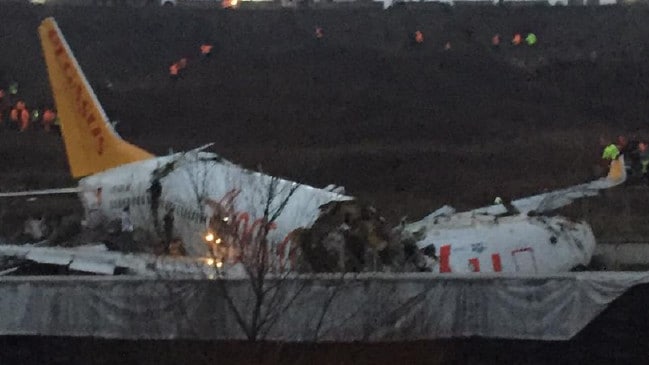 A passenger jet with 177 people on board snapped into three and burst into flames after skidding off the runway at Istanbul’s Sabiha Gokcen airport today.

At least 52 people were injured as a “result of a rough landing”, Turkey’s transport ministry says.

No fatalities have been reported so far.

Turkish media says the jet, which was flying from the Turkish city of Izmir, crashed into a road.

Video showed passengers with blood on their faces in the aftermath of the crash.

The fuselage appears to have broken into three pieces. NTV television also reported that the plane caught fire after the skidding but it has since been extinguished.

The Boeing 737-86J departed from Izmir Adnan Menderes Airport at 4:40pm local time and was due to arrive at Istanbul at 5:45pm but crashed at just before 6.20pm.

Pegasus Airlines has confirmed a crash happened, but has not provided anymore details.

NTV says the airport has been closed, with all flights being diverted to Istanbul’s Ataturk airport.