Another mind-bending photo appears to show a ship floating in the sky.

A bizarre optical illusion is to blame for the spooky sightings – which have stretched the length of the country.

The latest image shows a massive cruise liner ‘hovering in mid-air’ in Lyme Bay between Devon and Dorset.

Dave Medlock spotted the boat as he was out walking his dog on Sunday.

“It looks like something from Back to the Future, but I know it’s a special type of mirage,” he said.

Despite looking like it was floating, the boat was actually in the water.

It appeared to be suspended due to a phenomenon known as a superior mirage.

This causes an image to appear above where it really is, making this P&O cruise ship look like it’s flying.

It is one of many ‘floating ships’ which have left social media feeling all at sea.

Last week, David Morris spotted one as he walked along the Cornish coastline near Falmouth.

He was left “extremely baffled” when he spotted a large vessel apparently floating just above the waves.

Days earlier, several cruise ships were also seen “hovering” above the waters off the coast of Paignton, Devon.

Then Colin McCallum spotted a large red “floating vessel” on the horizon as he travelled through Banff, Aberdeenshire.

“When I first saw the boat, I had to do a double take because I genuinely thought it was floating,” he said.

“Upon further inspection, however, I noticed that it was in fact just a remarkable optical illusion.”

The phenomenon – known as Fata Morgana – is created when the sun heats up the atmosphere above either the land or the sea.

A layer of warmer air sits on top of a layer of cold air, causing the light from the ship to bend and making colours blend together.

For a Fata Morgana to appear, the atmospheric conditions have to be just right, reports the Mail Online.

It starts with a cold air mass close to the ground or surface of the water that is topped by a warm layer of air higher in the atmosphere.

Although the phenomenon can occur on land, they are more common at sea because water helps to form the cool air layer required.

Speaking of the Cornwall sighting, a Met Office spokesman said: “The images appear to show evidence of a phenomenon called Fata Morgana.

“A rare and complex form of mirage in which horizontal and vertical distortion, inversion and elevation of objects occur in changing patterns.

“The phenomenon occurs over a water surface and is produced by the superposition of several layers of air of different refractive index.”

BBC meteorologist David Braine said the phenomenon was caused by conditions in the atmosphere which bend light.

“Superior mirages occur because of the weather condition known as a temperature inversion, where cold air lies close to the sea with warmer air above it,” he said.

“Since cold air is denser than warm air, it bends light towards the eyes of someone standing on the ground or on the coast, changing how a distant object appears.”

The mirage takes its name from Morgan le Fay – a sorceress from Arthurian legend – said to use her witchcraft to lure unwitting sailors into her traps.

It is thought to be the reason for sightings of the Flying Dutchman, a 17th century “ghost ship” doomed to sail the seas forever. 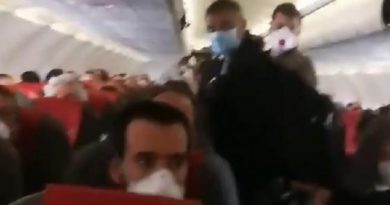 Fight breaks out on plane over lack of social distancing

Inquest in her death reveals she was not kidnapped