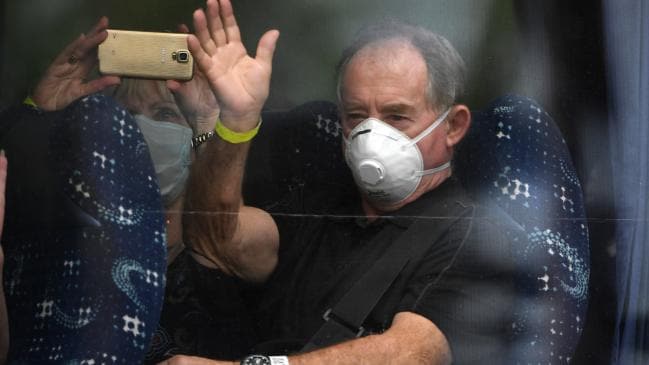 The Australian government says the coronavirus outbreak has been “contained”, even after another two people evacuated to Darwin from the Diamond Princess cruise ship tested positive.

“At the moment in Australia we have had no evidence whatsoever of community transmission,” Australian Chief Medical Officer Brendan Murphy told reporters in Melbourne on Saturday.

“We’ve tested thousands of people in this country. It is completely safe to go out in your community. I abhor any xenophobia that is being exhibited in some parts of the community.”

Australia will now start allowing students in years 11 and 12 to enter from China, except from the Hubei province, the epicentre of the coronavirus.

Health Minister Greg Hunt said the medical recommendation to the government is that the Australian Border Force continue to provide case-by-case exemptions to the travel ban from mainland China.

“In particular, that should include consideration of year 11 and 12 secondary school students from mainland China, excluding Hubei,” he said at the same press conference.

Six Australians who left the Diamond Princess on Thursday have now tested positive to the disease, with the figure expected to rise with another three patients to be screened on Saturday.

Two people from Victoria tested positive to the infection on Saturday and will be repatriated to their home state’s health system.

Two Queensland women aged 54 and 55 who tested positive on Friday night will be flown to a Brisbane hospital on Saturday for further treatment.

Earlier, two other Australians were confirmed to have contracted coronavirus.

A 78-year-old man from Western Australia was transferred to Sir Charles Gairdner Hospital in Perth on Friday. His wife was to travel with him but then be isolated at home for two weeks.

A 24-year-old woman from South Australia has been transferred to Royal Adelaide Hospital.

Under the evacuation deal, state governments agreed to treat any patients in their home states.

“We will continue to screen every day and to have that very precautionary approach to testing and ensuring that we are picking up early, and isolating early anybody who is positive for Covid-19,” Acting NT chief health officer Dianne Stephens told reporters this morning.

“We do have three people who are identified overnight that will be screened today, and tested. We have screening occurring this morning and I expect that there may be more people put into isolation during the day today, and we will have firm numbers about the testing sometime later this evening, and report those again in the morning.”

There were 170 Australians on the evacuation flight. They will be quarantined at the facility near Darwin for two weeks after leaving the virus-hit Diamond Princess cruise ship in Yokohama.

They are being kept separate from the 266 people who were already in quarantine at Howard Springs, who were evacuated earlier this month from the epicentre of the virus at Wuhan, the capital of China’s Hubei province.

They will leave on Sunday.

“The rest of the population at Howard Springs are doing very well, tomorrow the Wuhan cohort will go home, (they) are very excited to be going home tomorrow,” Dr Stephens said.

“The Diamond Princess cohort are settling into the facility, there are always going to be teething issues, and I understand the frustrations of some of the people in that cohort who have really had their holiday of a lifetime ruined by this event through no fault of their own. So we are trying our hardest to provide them with all their needs and we are caring for them and screen them every day and keeping them safe.”

Public health authorities from their home states are organising the medical transfers.

Despite clearing multiple screenings for the virus before being taken to the Howard Springs facility, Prof Murphy said the cases are not surprising.

“There has been ongoing detection of infection on the Diamond Princess cruise ship over the last few days, so it’s not unexpected that some people might have been incubating the virus,” he told reporters in Canberra on Friday.

“It’s possible more people could develop positive tests over the next few days. We don’t know that, but if they do we are completely well set up to detect and manage them and isolate them.”

Prof Murphy said both evacuees were in a clinically “reasonable” condition.

Four other people tested for coronavirus after returning to Australia on Thursday have been cleared and released from isolation back into general accommodation.

All six who had displayed cold-like symptoms were separated from others on the flight.

“Both these individuals will be taken into their hospital systems … to see whether or not they’re going to improve or deteriorate,” she told reporters. “Then their own health systems have systems in place to manage the COVID-19 infected patients.”

Australia earlier extended its ban on foreign travellers from China for another week as the number of infections and deaths in the coronavirus epicentre of Hubei province continues to grow.

Prime Minister Scott Morrison has ruled out compensation to tourism operators and universities hit by the travel ban.

“Coronavirus’ impact is right across the country,” he told reporters on Friday. “The taxpayer … is not an insurer for these things.”

Inside Tour Rouge the Tuscan villa hidden near Canberra