As we get busy exploring our own backyards this summer, some unlikely places have found themselves front and centre – and in hot demand.

These spots are usually overlooked by people planning summer holidays but in 2020 they’re finally starting to get the recognition they deserve.

Obviously these destinations are all dependent on any state borders you may need to cross to get there and what the rules may be at the time.

Often overshadowed by its bigger, flashier Sunshine Coast neighbours, Caloundra is proving to be “just right” this year, coming in sixth on TripAdvisor’s 2020 Summer Travel Index. Dubbed “the Southern Gateway of the Sunshine Coast” and just under two hours from Brisbane, Caloundra has a vibrant town centre but its main prize is its stretches of golden sands – from the main tourist drag of Kings Beach to the more secluded Currimundi Beach. You can also dip your toes in the most northern point of Pumicestone Passage, the waterway that separates Bribie Island from the mainland.

With its crystal-clear beaches, the fresh fare that comes being at the centre of Australia’s Oyster Coast and only two hours from the national capital and four hours from Sydney, it’s easy to understand how Batemans Bay earned a high rating on Expedia’s most-in-demand destinations for summer 2021. Even if spending all day on Surf and Denham beaches is not your thing, there are plenty of other activities, like kayaking on the Clyde River, cycling the foreshore trail, scuba diving around the cliffs and bushwalking through nearby national parks. Expedia reports both Kiama and Jervis Bay further up the south coast are also this summer standouts.

Tucked in northeast of Cape Patterson, Inverloch is a quintessential seaside Victorian town offering the best of both worlds – the safe waters of the turquoise-coloured Andersons Inlet as well as the brilliant beaches of the Bass Strait coastline. It’s a two-hour drive from Melbourne, adding to the reasons why Inverloch’s BIG4 Holiday Park has reported a 155 per cent increase in demand this year. The scenic Bunurong Coastal Drive, regarded by locals as a ‘mini-version of The Great Ocean Road’, shows off a range of great beaches and natural attractions like The Caves, reputed to have once been the hide-out of pirates.

Hobart may not usually the first place that comes to mind for fun in the sun, but this year the capital of the Apple Isle is a star performer, with Flight Centre reporting bookings 41 per cent up from last year. For all the history of the city centre and the majesty of Mount Wellington, one of the major reasons people are Hobart-bound is the reopening of MONA (Museum of Old and New Art) which has been closed since March due to COVID. Now, tickets to the grand gallery are in demand, so bookings are essential. On Hobart’s steamier days when temperatures can hit 30C, head to Seven Mile and Kingston beaches to cool off.

For people from other states who want to get as far away as possible, it makes sense that Perth – all the way on the other side of the country – is Skyscanner’s top-trending summer destination, with new searches increasing 39 per cent each week. Behind closed borders for most of 2020, there’s real appeal in exploring the city and its superb surrounds like Margaret River and Rottnest Island. But for those just after days on the beach, there’s always-popular Scarborough, family-favourite Brighton and the surfer’s paradise of Trigg.

This stopping spot on the road between Adelaide and Melbourne has become a favourite in its own right this summer, with demand for accommodation riding high according to BIG4 Holiday Parks. In Mount Gambier, be sure to get your lakes right as the sapphire-coloured gem Blue Lake and Valley Lake in town are lovely to look at but not for swimming. Just 14km down the road, however, the Little Blue Lake is the place for a dip. Then there’s the sunken gardens of the Umpherston Sinkhole, while the city itself is situated on the slopes of an old volcano, so there’s no shortage of trails to explore.

The triple treat of Darwin, Kakadu and Litchfield National Park is a winner, as Flight Centre reports the Top End has experienced a 347 per cent increase in bookings over the same time last year. Darwin beaches are mostly off limits due to the box jellyfish, but there’s plenty of history and culture to explore in the boom northern city. It’s a day trip to the World Heritage-listed Kakadu National Park, complete with its rugged landscapes, while only 90 minutes in the other direction to the Litchfield National Park, where one of the best thrills is swimming under the thundering double waterfalls at Florence Falls.

This article originally appeared on Escape and was reproduced with permission 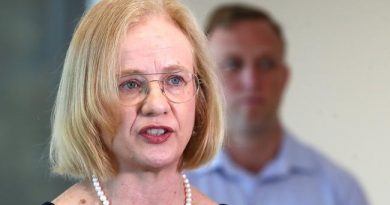 Why closing borders could help economy