We spent months cooped up indoors during COVID-19 lockdowns. Now, not only are our cities and regions coming alive again – we’re being given free money to go out and enjoy them.

State and territory government are releasing vouchers to residents to redeem as discounts on tourism, dining, arts and entertainment experiences to support those industries doing it tough.

It’s essentially a day or night out, or a few nights away, on the government’s coin.

Voucher schemes vary from state to state – in some cases, every adult resident can claim them, while in others, you have to be a lucky winner.

Here’s a breakdown of the voucher schemes currently on offer across Australia.

Every NSW resident aged 18 and over can claim $100 in Dine and Discover vouchers to support businesses in hospitality, arts and recreation across the state.

There are four $25 vouchers all up. That includes two $25 Dine vouchers, which can be spent at restaurants, cafes, bars, wineries, pubs and clubs. The other two are $25 Discover vouchers, to be redeemed on cultural experiences like entertainment and recreation, live music, museums, galleries and arts venues. A full list of participating businesses can be found here.

The vouchers can be used seven days a week but they will expire on June 30, 2021.

In a different scheme, in June, the NSW Government will release 200,000 vouchers worth $100 each for hotel stays in the Sydney CBD. Watch this space.

The Queensland Government has launched another round of its holiday dollars campaign to boost the embattled tourism sector.

The catch is, not everyone will get them – you have to apply to win.

The latest draw to win one of 30,000 vouchers to the value of $100 to be spent in Brisbane opened on Tuesday and will run until midday Friday.

The vouchers can be spent on tourism experiences in the greater Brisbane region, including Brisbane City, Scenic Rim, Moreton Bay, Redlands Coast, Somerset, Logan and Ipswich, between May 6 and August 15, 2021.

It comes after a successful campaign to drive travellers to the Cairns region, where more than 100,000 people applied for 15,000 vouchers valued at up to $200. After Brisbane, the next round will be for the Whitsundays, from May 4.

How do I apply? Visit queensland.com to see all the rounds of Holiday Dollars and apply for the current draw.

The bad news is allocations for the first three rounds of Victoria’s Travel Voucher Scheme have already been exhausted – and with great speed. The good news is a fourth round is coming, but we don’t know when yet.

The scheme involves $200 vouchers to be spent on accommodation, attractions and tours in regional Victoria, the Yarra and Dandenong Ranges or the Mornington Peninsula. More than 150,000 vouchers were snapped up during the first three rounds, and a separate travel voucher scheme was also launched for metropolitan Melbourne. (Allocations are already exhausted for that, too.)

Last month the Victorian Government confirmed there would be a fourth round, featuring vouchers taken up in the initial rounds but not used. More details are to be announced.

How do I apply for the fourth round? It hasn’t been updated with fourth round details yet, but information on the scheme is on the vic.gov.au website.

There will be a fourth round of South Australia’s travel voucher scheme launching in late May, following the success of the previous three rounds (round three applications closed last week).

The vouchers, which are to be used to boost tourism through winter, will give $50 off participating accommodation providers in regional South Australia and suburban Adelaide, and $100 off hotels in the Adelaide CBD and North Adelaide.

More than 100,000 people registered and 50,000 people were successful in the third round of vouchers for tours and experiences, which were made available via an electronic randomised ballot. Those lucky voucher holders can see a list of participating experiences here.

Similar voucher offers in Western Australia, Tasmania, Northern Territory and the ACT have already wrapped up or applications are now closed. 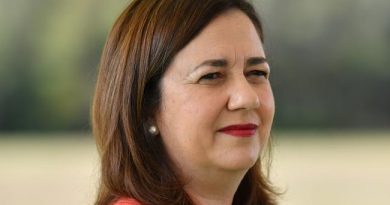 GPS tracker for quarantine breacher who went to pub