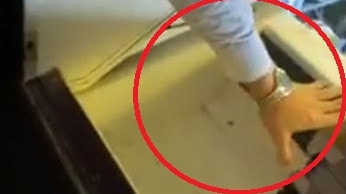 Virgin Australia has lifted the lid on a secret compartment on-board one of their long-haul Boeing 777 jets, unveiling just how flight attendants escape from their private cabin during a mid-air emergency.

In a seven-minute Instagram story on the airline’s page, a crew member shows social media users the eight-bunk-bed chamber above economy class where flight attendants can go for a nap.

But it’s the hidden door beneath one of the bunk beds that may surprise you the most.

As the crew member, Blair, unlocks a pin-operated door on-board the aircraft, viewers are taken to parts of the aircraft not usually seen by regular passengers.

“As you can see there’s not a lot of space up here … similar to a little Japanese capsule hotel,” he explained of the cabin.

“The bunks are very comfortable … they come with a pillow, a duvet and a blanket with a nice mattress as well, so it’s very comfortable. We do have seatbelts on-board, which have to be worn at all times … there’s an airflow switch and also a reading light. You can read a book … or watch a movie.”

The flight attendant then moves on to the hidden hatch, which sits below the mattress of one of the bunk beds.

“(The hatch) is here for the crew and is very hidden,” he explained while opening the door to the emergency escape.

“It locks in place and then you can go down there. If you’ve ever wondered why there’s an (overhead) locker without a handle … that’s why.”

The crew cabin of the 777 sits at the rear of the economy cabin and above the overhead lockers.

“You get a lot of the aircraft noise (in the crew cabin) like you would normally in the cabin, but you don’t hear the call bells or any PAs that come over the system,” Blair explained.

“Our cabin manager always stays at the front left bed, so if there’s any emergency we always know where our on-board leader will be.”

The flight attendant ends the tour by jumping through the emergency exit shoot that leads from the crew cabin compartment into economy.

This type of exit would be used if there was a fire blocking the usual exit from the crew cabin to the economy cabin, requiring flight attendants to escape by other means. For other aircraft, like the A380, the main crew rest area is below economy seats – meaning the crew escape is a hatch that pops open in the floor.