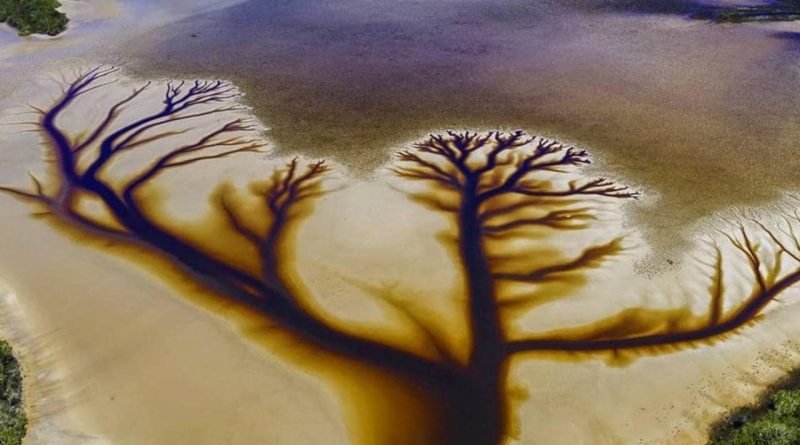 A photographer has witnessed a stunning site from his drone, following months of heavy rain and storms in northern NSW.

Derry Moroney admits he was “totally shocked” when he first saw the footage he had caught on camera while flying the device over the Cakora Lake, two hours south of Byron Bay, given from the ground the river didn’t look any different.

But after filming from a 119m altitude, the images displayed a ‘Tree of Life’ and created a natural spectacle with more than 2200 people sharing Mr Moroney’s images on social media.

“If you were to look at the image you wouldn’t think it was real at first,” he said.

“At the very end of the lake the water runs out and it all spines out into a tree-of-life look.”

The tree-like pattern is caused by Tea Tree oil settling in the lake after a storm and creating patterns, so when a storm fills the late and the water collides with the ocean, a natural masterpiece is created in the shape of a tree.

“I was in complete awe at what mother nature had created and that so many people didn’t get to see it,” he told the Daily Mail.

“The picture was taken at 119m altitude so it would be impossible for anyone not in a plane to see it.

“The water is soaked by Tea Tree oils, hence the brown colour, and the extra water flowing out of the lake has created this stunning natural masterpiece,” he added on social media.