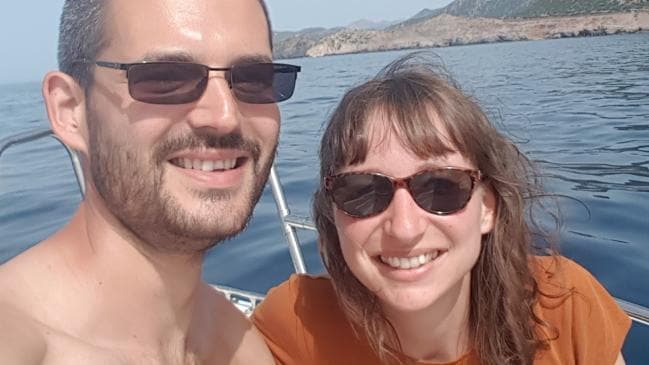 A young couple have revealed how they managed to live out their retirement dreams 30 years early – by ditching their jobs and moving to a idyllic Greek island where they live on $10,000 a year.

Steph, 30 and Mat Trott, 34, from Sussex, UK, decided to leave their businesses as dog walkers in August 2018 and move to the small village Houmeri on the Greek island of Crete.

After getting fed up of living with Steph’s parents – they even lived in a caravan while they scraped together money for a deposit to get on the property ladder – they decided to skip ahead 30 years and move to the Greek village they’d dreamt of retiring to.

The pair spent about $99,000 of their savings to buy a two-bedroom villa in the quiet village, surrounded by olive trees, and say it was the “best decision” they’ve made.

The eco-conscious couple said they tried to lead a sustainable lifestyle by using a solar oven for cooking, maintaining their own vegetable garden, installing a water system that filtered their water, using a composting toilet and only using electricity when necessary.

The couple have even bought a $50,000 stone ruin, named the “Walnut Cottage”, which they are renovating and plan to rent out on Airbnb next year.

Ms Trott said the couple couldn’t afford the lifestyle they wanted in the UK and found the “extortionate” property prices in Sussex were especially out of their reach.

“We absolutely loved our jobs – a lot of people were asking us why we wanted to leave, as we had the best job in the world.

“We could have stayed doing that for years we were living at my parent’s house, we even rented a caravan for a while just so we could save some money but we couldn’t really progress much further.

“We were dreaming of moving to Greece when we retired but eventually, we decided to do it earlier.

“My family was going to Greece every year for holidays so I have such fond memories and Matt came out for a year when he was 18 so when we met we had this common love.”

The couple now only works over the summer period, with Steph working part-time in a hotel and Mat, who works as an animal nurse assistant, travelling back in the UK for six weeks.

Although their salary in the UK was around $40,000 a year, the pair said their alternative lifestyle let them survive on no more than $10,000.

“We try to be as eco-friendly and go back to nature as much as possible, our whole aim is to be as environmentally friendly as we can,” Ms Trott said.

“We are very frugal, we don’t have any mortgage, our outgoings every month are minimal, we are vegetarians, we try to do everything to reduce our impact on the earth.

“We are cutting out chemicals so I have started to make my own beauty products, we try to reduce the amount of plastic we use too, we have re-usable items for everything.

“In the winter we cook on the log burner and in the summer, we use our solar ovens so we use as little electricity as possible.

“When we were saving to come to Crete, we reached a point where we were saving about 90 per cent of our wage so we got so good at saving money, we know how to cut corners on everything.

“Some might think we are lazy but our aim is to give back – we are raising money to neuter the stray cats, we are planting fruit trees up our lane for anyone in the village to come and pick the fruit, we are cleaning the beaches.”

The couple said moving to Crete was “the best decision they could have made” and they weren’t planning to return in the UK anytime soon.