There was confusion and concern at Sydney International Airport today as travellers arrived to self-isolation measures amid the coronavirus pandemic.

Some were told of the strict new rule where anyone arriving from overseas has to self-isolate for 14 days mid-flight or when they checked in, leaving them with nothing else to do but continue on their journey.

For non-Australians it means holiday plans are ruined, with one German family with two children now stuck in isolation at a hotel for two weeks.

RELATED: Can I still go to the gym?

RELATED: What are the coronavirus symptoms?

But many were concerned there was no screening when they arrived, as temperatures get checked at other international airports.

“It’s really embarrassing and disorganised,” said the German mum who did not want to be named because she said the information sheet they were given said not to talk to anyone.

“There’s no help, no information, it’s unbelievable. We had to ask ourselves to get another information sheet. We don’t know if we can fly home.”

Passengers were given information sheets and said they were told of the strict new measures while in queues at customs.

One woman returning from Thailand via Singapore told news.com.au she was shocked there was no screening at Brisbane International Airport.

“In Thailand and Singapore at airports and shopping centres and hotels, they (temperature scanners) were everywhere,” she said.

“Then we fly back into Brissy and nothing … we were mortified.”

RELATED: Get the latest coronavirus updates

RELATED: I feel sick, can I get tested?

Another woman arriving in Sydney from Vancouver, Canada, said she was concerned there was still flights from China.

“I was freaking out, I wanted to get out of there,” she said.

“It’s really outrageous. It’s a bit concerning when you’re in there and you see people from China landing. It’s a bit of a scare.”

UK couple Ryan Connolly and Beth Nelson had to cut their time travelling through Asia and decided to see out their holiday in Australia.

But they said they were given conflicting information from custom officers, with one saying you couldn’t even give cash to a delivery driver and another saying they could go out to get food and fresh air.

Leanne Waipuka arrived from New Zealand and said she too was told she could go to the shops, but as long as she wore a mask.

“They don’t ask you anything (when you arrive),” she said.

“It was pretty easy.”

Adelaide resident Nickii Tasker was stuck at the airport for seven hours during her stopover from Auckland because she’d planned to catch up with friends in Sydney.

“I suppose it’s a bit confusing – what do we do when we get home? Does my partner have to ring his work? Can we stay in the same house?”

Travellers were told they could still take their connecting flights and return flights home if they were within the 14-day period.

Deputy Chief Medical Officer Dr Paul Kelly said if people were unwell they would not be allowed to continue their journey.

Travellers are not given masks unless they’re symptomatic.

“I think people have to make their own decisions,” Dr Kelly said.

“We’re all in this together and people will have to decide themselves about their own risk and the risk for themselves and their children.”

The Prime Minister’s office said the new quarantine measures were designed to slow the virus’ spread.

“The quarantine period is enforceable under state laws and we expect Australians and visitors to take their obligations to self-isolate for 14 days seriously,” a spokeswoman said. 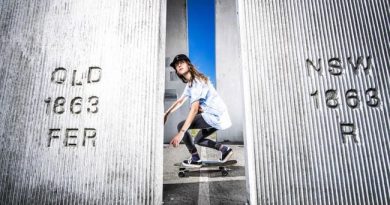