Australia is considering a travel ban on all of Europe.

Health Minister Greg Hunt made the announcement in a media conference this afternoon.

The Prime Minister has asked health officials to consider the ban following the coronavirus pandemic.

It follows the United States suspending all travel from the continent.

Mr Hunt said there were 128 confirmed cases of coronavirus in Australia, which already has travel bans in place for China, Iran, South Korea and Italy.

A European travel ban would mean all Australian citizens and permanent residents returning from Europe would be required to self isolate for two weeks.

International visitors would be prevented from entering the country entirely.

“We will continue to follow the medical advice,” Mr Hunt said.

Earlier this week the government extended the travel ban to Italy, which has the largest outbreak outside of China.

US President Donald Trump announced the US ban today but raised eyebrows when he exempted the UK.

“To keep new cases from entering our shores we will be suspending all travel from Europe to the United States for the next 30 days,” he said.

The travel restrictions will kick in at midnight on Friday.

Trump said “we are marshalling the full power” of the government and private sector to protect the American people.

He said the new travel restrictions were “strong but necessary”, calling the COVID-19 virus a “horrible infection”.

The President praised the nation’s “unprecedented response” to the outbreak, while also blaming the European Union for failing to take early action against the virus.

“Taking early intense action, we have seen dramatically fewer cases of the virus in the United States than are now present in Europe,” he said.

“The European Union failed to take the same precautions and restrict travel from China and other hot spots.

“As a result, a large number of new clusters in the United States were seeded by travellers from Europe.”

Mr Hunt was asked why officials had not been asked to consider restrictions to the US.

He said the focus was on the areas that had been flagged as “global epicentres” of the virus.

“We look at this at a national level, there are four countries around the world that have been identified as the major centres of transmission,” he said. 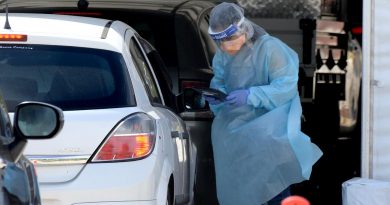