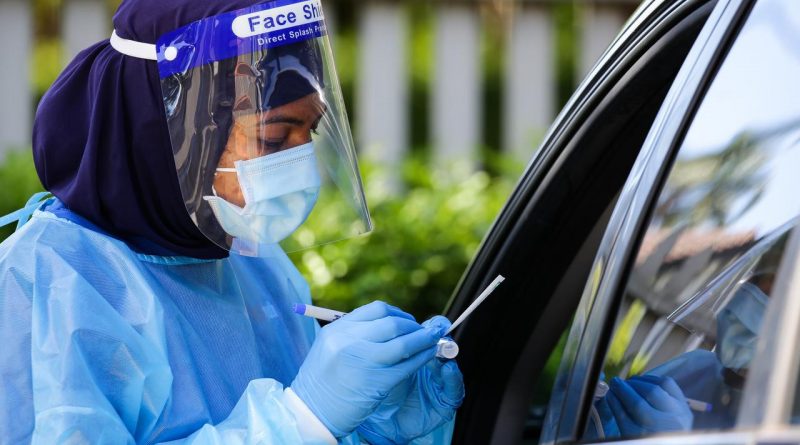 Authorities across Australia are scrambling to stop a coronavirus outbreak in Sydney’s northern beaches from spreading to their states and territories.

A total of 17 new locally acquired cases linked to a cluster in the Harbour City’s northern beaches has sparked new travel restrictions overnight, just one week before Christmas.

The local government area has now been blacklisted by authorities around the nation, throwing festive travel plans into serious doubt for thousands of Australians.

Victoria is telling northern beaches residents and visitors to quarantine at home for 14 days and get tested if they are travelling into the state.

Meanwhile, Queensland, the Northern Territory and Western Australia will require travellers who have visited the LGA to go into quarantine for 14 days.

The Sunshine State will make travellers from Saturday go into hotel quarantine at their own expense.

The NT says arrivals from the hotspot will have to quarantine for 14 days in Darwin or Alice Springs.

WA is going a step further, ordering all NSW residents into self-quarantine for 14 days, with a test on day 11

But Tasmania has gone hardest, stating that anyone who has been to the Northern Beaches since December 11 is not allowed to enter the state at all.

The ACT says people who have been to the affected areas must quarantine and get tested.

Here’s a breakdown of the rules for each state.

Queensland’s chief health officer, Dr Jeannette Young, said the new rules would apply to anyone who had been in the northern beaches region on or since Friday, December 11.

If that’s you, and you are already in Queensland, you are required to get tested for the virus and quarantine in your home or accommodation until 14 days after the date you left the northern beaches.

If you arrived in Queensland on a flight from Sydney after midnight (12am Friday, December 18), the same rule applies.

Finally, if you arrive in Queensland after 1am on Saturday, you’ll be required to go into hotel quarantine at your own expense.

These new requirements affect both interstate visitors and Queensland residents who are returning home.

Dr Young said Queensland Health would continue to “closely monitor the situation”, and provide an update on Friday morning.

In Western Australia, anyone arriving from New South Wales from Friday onwards will have to quarantine for two weeks.

If you travelled to WA from NSW since December 11, you must get tested and then self-isolate until you get a negative result.

“I understand these changes will cause frustration and uncertainty for some people, and be very upsetting for many families looking to reunite and spend Christmas together,” Premier Mark McGowan said.

“This has been a difficult decision to make, but we need to follow the health advice and do what is in the best interest of all Western Australians.”

Tasmania has banned anyone who’s been in the Northern Beaches area on or since December 11 from entering the state.

If you’re already there, you have been asked to call the Public Health Hotline on 1800 671 738 to advise it of your movements and book a test.

The Northern Territory has declared the Northern Beaches a virus hotspot.

Chief Minister Michael Gunner has announced anyone travelling to the NT from the region must undertake 14 days of supervised quarantine in either Alice Springs or Darwin, at a cost of $2500 per person.

“If you are intending to travel to the Northern Territory from an identified COVID-19 hotspot, you are advised to rethink your plans,” the NT government said.

“Anyone who has already arrived in the Northern Territory from Northern Beaches Council LGA on or after December 11 needs to arrange for a COVID-19 test and self-quarantine while awaiting the test results.”

Victoria has asked anyone who’s been in the Northern Beaches area since December 11 to “stay at home and get tested tomorrow”.

“They should stay at home until results are available and especially avoid visiting aged care facilities and hospitals. Further guidance will be issued as information becomes available,” the state’s Department of Health and Human Services said.

Further travel advice will be announced on Friday.

Residents and visitors to the Northern Beaches are being told to self-quarantine and get tested, Canberrans told to avoid the area.

South Australia has not made any announcements yet. Currently, those who have come from NSW are urged to monitor themselves and isolate if they develop symptoms.